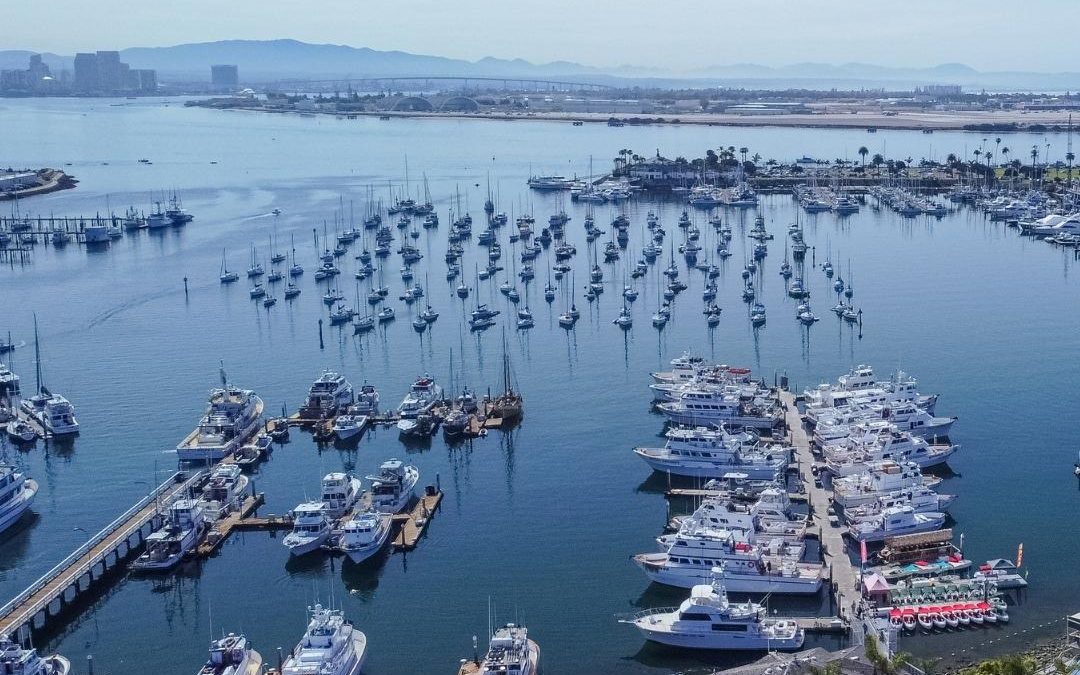 San Diego is home to over 500 different bird species making it one of the largest populations in the whole country. It’s a birdwatcher’s dream! You can find many of these fascinating birds in and around the San Diego Bay along with other interesting creatures. Read on to find out who you just might meet while out pedaling, sailing, or walking along the bay.

Who is that diving from the sky? Is it Superman? No, it is the amazing California Brown Pelican. The only species of pelican found in the western hemisphere; they are known for their plunging skills. Watch them in awe as they plummet from upwards of 60 feet, crash into the ocean, and scoop up their dinner. Their pouches hold up to three gallons of fish and water. Good eaters, they can devour close to 4 lbs. of fish per day.

Click here for some cool facts about the California Brown Pelican.

Who is that barking you might wonder as you pedal through the harbor? Why it is our year-round friends, the sea lions. Vocal and gregarious animals, it is not unlikely to see groups of 10 or more lounging on boat docks, buoys, and rocks. Males can reach up to 700 lbs. while females top out around 250 lbs. Can you imagine a 700 lb. sea lion on your boat? It does happen. Fast swimmers, they can stay under water for up to 10 minutes and hunt in the ocean for days at a time.

Click here to learn more about the sea lions.

You might also come upon a Pacific Harbor Seal or two. How do you tell the difference between a sea lion and a seal? Sea lions have a flap over their ears while seals do not. You will also see a difference in their feet or “flippers.” Sea lions have elongated flippers which allow them to move quickly on land, while seals have stubby feet and use their bellies to propel themselves out of the water. Another interesting difference is that seals are solitary animals and do not interact with each other normally. An exception is seal mothers and their pups who have a very strong bond.

Is it a bird? Is it a duck? It is the Surf Scoter, classified as a sea duck. The males have colorful beaks of orange, black and white and are all black except for a few white patches around the nape and forehead. Because of their markings, they have been nicknamed “old skunk head.” The females are more muted with a dark bill. They breed up north but enjoy spending their winters in the bays and harbors of Southern and Baja California including San Diego. Surf Scoter’s dive for their food, often in flocks, to help ward off food-stealing gulls.

Birdwatchers may be able to spot a Common Loon in the winter months, but they need to be on the lookout. Only about 150 of these birds visit during the colder months. A water bird, they catch and eat their food underwater. Their feet are set far back on their bodies which makes them excellent swimmers, but clumsy on land. Just like an airplane, they need a runway to gain enough speed to achieve lift-off. You might see them running across the top of the water and flapping their wings to get up in the air.

Click here to read more about the Common Loon.

Are you watching a ballet? No, it’s the courtship between a male and female Western Grebe who appear to be dancing on the water in synchrony. These water birds frequent the San Diego Bay each winter with some now remaining throughout the year for breeding. With beautiful black and white feathers, yellow beaks, and swan-like necks, they are truly elegant.

Click here for more interesting tidbits on the Western Grebe.

If you are really lucky, you might spot a Pacific Green Sea Turtle in the San Diego Bay. Currently, there are about 60 sea turtles calling the bay their home. They are long-term residents, only leaving to go to their nesting beaches in Mexico. Endangered, they were legally harvested for their meat and eggs from the 1900s to the early 1990s. Protections were put in place starting in the 1970s and their numbers are increasing. Primarily herbivores, their diet is what makes their shells green.

To find out more about the Pacific Green Sea Turtle, click here.

An Eco Boat Rental is the perfect way to explore the bay. Book a boat here.